A few days ago my dad asked me which song defined my past year at school.

I, being the motormouth that I am when it comes to things like movies, television, and music (good thing that’s my major, right?), rattled off a couple bands and songs that made up my experience, trying to piece together what was the one thing that defined the year.

What I didn’t realize, however, is that he was right. It wasn’t just one song or one band. But, there were a couple notable bands.

And Of Monsters and Men was one of them.

Before I saw them at Lollapalooza last year, I was like everyone else and had only listened to ‘Little Talks.’ Now I’m like everyone else and listen to the album on repeat. But it was that concert that inspired me to religiously listen to that band. I was so intrigued by their sound and their stage presence that I wanted to listen to them more. That, and I felt like they deserved my attention away from the concert experience, because, unfortunately, it was a pretty lousy crowd. My friends and I were surrounded by seemingly particularly-taller-than-normal guys that were quite crude, and, let’s face it, drunk off their rockers. There isn’t anything wrong with imbibing at a concert, but if you’re going to be one of the sardine-like moshers, at least have some consideration and try to attempt to sober up before you invade peoples’ personal bubbles. 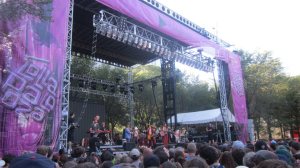 So, My Head is An Animal was added to my list of albums I played on repeat. What made this album particularly special, though, is that it was the perfect workout album.

Without “King and Lionheart,” “Mountain Sound,” “Six Weeks,” and “Lakehouse,” I would have never lost the weight that I did.

Of Monsters and Men had spirit and optimism that’s rare to find. It incorporated wanderlust, love, inspiration, friendship all into an album. There were the strong percussive songs like “Six Weeks,” and the uplifting trumpet solos in “Lakehouse.” I got a boost of confidence and courage every time I listened to them, and when you’re trying to establish a healthier lifestyle, incorporating uplifting music into your routine is some of the best advice I can give.

They also were just fun. They were perfect to walking to class or running to on a sunny day. Also, the album was very dance-able, which is a plus in my book.

So after nearly a year of becoming incredibly endeared to this band, I saw them again, and was determined to give them my undivided attention.

The opener was Half Moon Run – a band neither my brother, dad nor I had heard about before we went to the concert. We were pleasantly surprised, however, as their sound reflected my sort of style of bands that I enjoy. 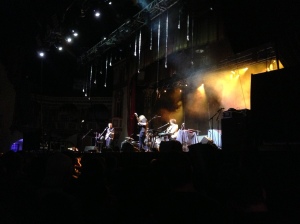 “They kind of remind me of Local Natives!” my brother said.

It was just four of them, and they knew that not everyone in the crowd knew who they were, but that didn’t stop them from head banging and jumping around on stage. Their set was short and sweet – only a half an hour long. They were gracious and fun, with an impressive variety of songs. One song was dance-y and the next had people swaying and slowing down.

My brother and I then moved from the outskirts of the crowd on the right of the stage into the heart of the crowd, centering ourselves right infront of the stage which donned a large curtain. The speaker system filled the room with various French female vocalists, and I was convinced they were all Edith Piaf.

“No, Claire. They aren’t all Edith Piaf songs. That’s just the only French singer you know,” my brother said.

He was right, I have to admit.

After about a twenty minute wait, the band came out from behind the curtain, their shadows showing up in blue lighting. They started “Dirty Paws” and then… 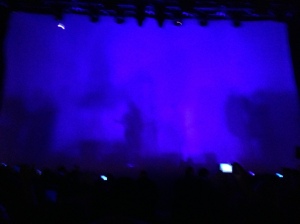 The curtain came down in a flourish, revealing the band and their set.

The backdrop for the show was made up glowing hanging orbs, which would change color along with the rest of the lighting. It was beautiful, and the array of shades and shadows that played on the stage was also a visual delight. 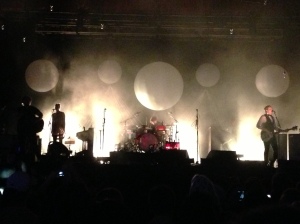 The band pretty much went through their entire album, and while not in order, they did start with their first song and end with their last song for the encore. In the midst of the show, though, they did play a few unreleased tracks. Needless to say, I was giddy when they played the new songs.

As much as I love standing and dancing to bands, I would really love to see Of Monsters and Men in a more intimate setting. A small lounge set up, with people all sitting around the band, enjoying the music and maybe getting up to dance for songs like “Little Talks.”

Despite this, I still loved the show. I’m always a sucker for clapping along to a song, and especially if the rhythm isn’t just a basic clap-a-long. Variety in clapping styles is something I appreciate.

“Lakehouse” was the best song they performed.

“This is a song about the summertime,” Nanna Bryndís Hilmarsdóttir said before leading into the song. There were some hoots and hollers from the crowd, from those excited for the next couple of months to come.

The song starts out so simply, so calm. And then there’s the switch of vocals and the building percussion, and then – it gets soft again, but not as soft as the beginning. And the song just swells and swells and swells into all that’s left to do is sing “La la la la” because the song has reached a new level of euphoric instrumentation and sound.

They of course “ended” their show with the ever effervescent “Little Talks,” and then came out for their encore, which was “Yellow Light.”

“This is our last song, it’s a lullaby.”

Funny, because usually when I listen to it, I’m usually waking up.

Not only is this an album that is perfect for working out to, but it is also a perfect album to fall asleep and wake up to, especially for long train rides. I don’t sleep well on trains, so having at least one enjoyable element to an overall non-enjoyable sleeping experience is nice to have. I’ll put on “Dirty Paws,” and before I know it, the train is rocking and moving along the countryside as “Yellow Light” begins to play.

Out of all of the visual effects the concert incorporated, the fake, falling snow with the encore was the best. It just gave a peaceful, passionate feel to the performance, and nice ending touch.

We left the concert satisfied. It was just a good experience, and sometimes you need that good, solid experience. It helps put everything in perspective.

Especially to the travelers out there, with songs like “From Finner.” You can find happiness and inspiration anywhere.